The journey through scarydark had been long. Bunlings kept stopping and peeking behind them to make sure the strange mirror creatures were not following. They didn’t. Eventually they decided that Faireland magic kept them in the Mirror World and relaxed.

“Maybe they’re not mean? Maybe they just look all grrrr?”

“Like Matshan?” Bunling flopped his ears thoughtfully. Maybe the Mirror Creatures would be full of good magic too when met.

“Ys.” Both bunlings paused to consider this possibility, then shook their heads.

“There was no critters near, only bones. That’s bad grrr.”

“They can stay in the mirror. No need to hlp out!”

Happy with their decision the bunlings continued following the gigantic glowing mushrooms that towered over them. The corridors were long and dark, but eventually their noses caught a familiar scent.

Hopping turned into zooming as the bunlings followed their noses straight into the bazaar, and into the carrot container, the true golden treasure of the Bazaar Dungeon.

Bunlings are adventuring in The Bazaar Dungeon at Fantasy Faire. Come join them!

It all started on December 3rd. Addler the Butler Otter promoted the Brothers Squirrel as his Majorly Mostly Assistant Decoration Wranglers. Mostly because they had paws that could reach and grab and twist and twine, and poor Addler himself had always been somewhat paw-challenged due to his round tummy that he was extremely proud of. 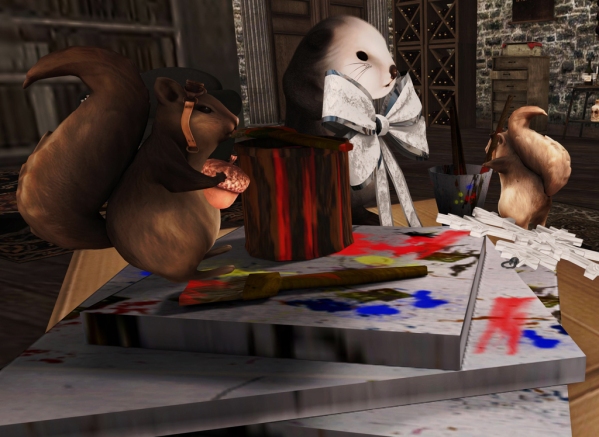 After the decorations came Addler’s favourite part: baking! Not that he could bake anything himself (see: paw-challenged), but the Hamster Baking Brigade was extremely professional and a joy to watch and sniff. One of the bunlings had taken the art of Learning Letters very seriously and could now read almost every other word from the Big Book of Noms. He told Addler every other word was ‘nom’, and who was Addler to question his learned ways. 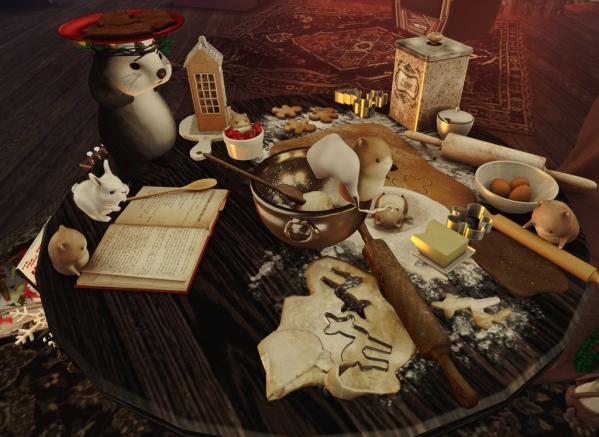 While the critters on the table plateau were focused on baking, a disaster struck on the lower level: suddenly everything except the rugs was lava! The Bunling learning the Art of Scribbling immediately made an alarm flag. The Bunlings had wisely divided the Arts so that one of them learned to Read, the other to Write.

The Brothers Squirrel figured out an escape plan immediately, but only the penguins showed interest or daring to follow them across the ladder. The Squirrel in charge of Taking (the other was in charge of Keeping) even performed a small squirrel jig to show everyone it wasn’t dangerous. He knew it was the work of the Magician and surely he would not fry the critters in lava: not good barbeque!

The brave escapades were forgotten the moment the scent of ready gingerbread cookies descended to the rug-level. Lava and adventurous challenges already forgotten, it was time to party! The Nom Fest was so thorough that the Brothers Squirrel forgot to ponder where had Addler gone.

Addler had orchestrated the Grand Nom Feast on the main table. On many tables. After several Critter Committees were held on the decor and colour matching, defeat was admitted and the Bunling scribbled a plea for help in the flag: magician aid was required. After some patient translation work from the Ladybun, the Magician got to work to change the critter infested mess into a proper feast.

What a feast it was! Addler could barely see to the other end of the table! The Ladybun had helped him with a bow tie (see: paw-challenged) and all he had to do now was oversee everything from his spot at the end of the table. Well, to see, and watch and sniff and approve. Extremely responsible job! 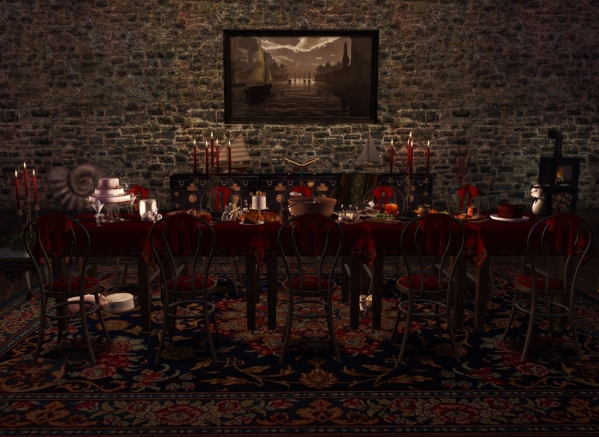 The Rat Band had settled next to the cheese tray that had been promised to them, already playing festive songs such as Every Whisker Glitters and All the Red Ribbons and the critter favourite Nom Day Every Day.

The Bunling that Knows Bun Glyphs had found tiny bunlings from a glowing jar of snow. He pressed his nose against the glass and wiggled it in hopes of communication, but the tiny figures did not move. Surely there should be another plea for the Magician to make them come alive.

In the meanwhile, under the tree, everything was peaceful. The band played a song or two to keep in shape, the weffs practiced puppy parkour on the presents, the guest bunnies were helping with the decor and the cocoa train kept driving around the tree in slow, delicious circles.

Everything was ready. Just one more night to wait.

I meant to simply take pictures of the hijinks and shenanigans happening home as usual and add them to Flickr for shared amusement, but this December the story just kept growing and growing and called for more words. So here: a home-ful of critters to wish everyone a delightful, happy and relaxed holiday!

A lot of noms and critters from the Arcade, the tree from the Midwinter Fair.