The Spirits of Hope live in the dark. They have wings: some stronger than others, some more battered and even torn. There are those who lost their ability to fly altogether.

Without wings their journey is harder, more challenging. In those moments it might seem all of the Hope is lost and can never find their way again.

But if one such creature with just one wing meets another of similar kind, they can learn to fly together. Two different wings creating enough of balance for them to move again.

In time their wings will grow back, in time they’ll sing and soar and light the darkness. But for those despairing moments in the dark it is enough to share their wounded wings and fly.

She was caught by the dark magic of the Hedge a long time ago, body dragged into the soil, trapped and wrapped in the thorny roots, soul slowly seeped into the orb with all the other prey the entity managed to catch in its greedy vines.

Rotting was surprisingly slow, almost subtle, the pulsing magic keeping the body operational. The other changes were more drastic: the claws, the horns, the bone structures growing out like thorns, like she herself was no more than a vine now. 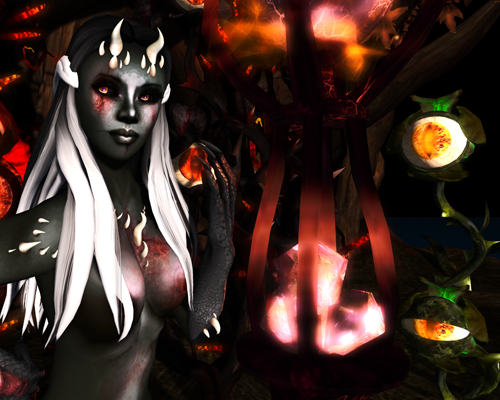 If she still had had a mind of her own, she might have wondered if she would turn fully a part of the entity plant in time. Perhaps the staring eyes were all that was left from the earlier preys, now aware only enough to fulfill their observing function.

But no, there was no more wondering or thoughts: simply a function as slightly more independently moving part of the entity. The reaching, calling, tempting part of the extremely carnivorous plant.

The Rotten Drow skin by Fallen Gods Inc., Khor feet and hands by [europa], Eternity hair by Analog Dog, Oracle horn set by .{Rue}. and all the plants and the orb by Cerridwen’s Cauldron are available in the October’s round of We Love Roleplay that started today. Here’s your teleport to the event!

Full credit for loosely interpreted concept to the Thorn Prince in these books. ❤

Fire has always been both a blessing and a threat. It warms and it burns, it cooks meals and destroys buildings, it supports life and it steals it away. It’s no wonder all around the world we have imagined creatures that live within it, creatures that fire does not burn, creatures that swim in lava and always we have envisioned them fearsome.

Most of the fire-associated creatures are also always if not downright evil, at least scary. Dragons, demons, djinni, perhaps only the mysterious phoenix manages to escape to the general good side. 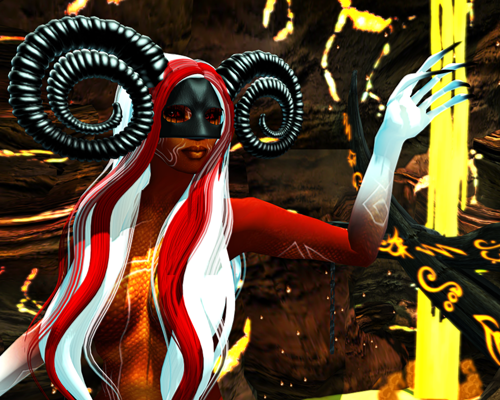 Who is to say what they really want, the fire creatures? Maybe even the salamander queen wants to simply bask in the heat like a common little lizard and wouldn’t spare one single thought on the nosy, noisy, flammable humans.

No better way to start a day than a warm dip in the lava, after all.

Both the Draco Magma skin by Fallen Gods Inc. and the Khor Feet by [europa] are available in the current round of We Love Role-play.

The (lack of) Outfit: Mask with Horns: *BOOM* I am Aries Titanium (from old Zodiac, not sure if it’s available anymore)

There’s a feeling of depth in the sky when it darkens. It reaches down, covers the world, becomes a more tangible part of it. Gone is the illusion of distance, of the various shades dancing on the edges of blue covering the heights above us: during the night sky is all around us.

The night makes it all a part of the same in our mindscapes, closes all distances, brings everything within touch range. It hides the sharp lines of logic and reality from our eyes and lures out the other senses, invites imagination, becomes a sensation instead of a sight.

Enough so that if you look up to the calling depths around and above, you could almost believe that all it takes is letting go and diving upwards. For the sky is just another sea.

The feather hat and accompanying accessories by Zibska are available in The Gallery Gift Shop. The Concubine dress by [ SAKIDE ] can be found in World Goth Fair Port Seraphine. The skin by +Nuuna+ and makeup by Beautiful Freak can be purchased from World Goth Fair Cursed. Speaking of World Goth Fair, it will close 12 hours later than originally intended since it opened 12 hours late: you have time to goth-shop until noon SLT on June 1.

Surreal, vivid, alien. Both the horned female covered in intricate scales and the jungle surrounding her. Even the moonlight dancing on her bare skin seems out of this world, tinting her in camouflaging tones. 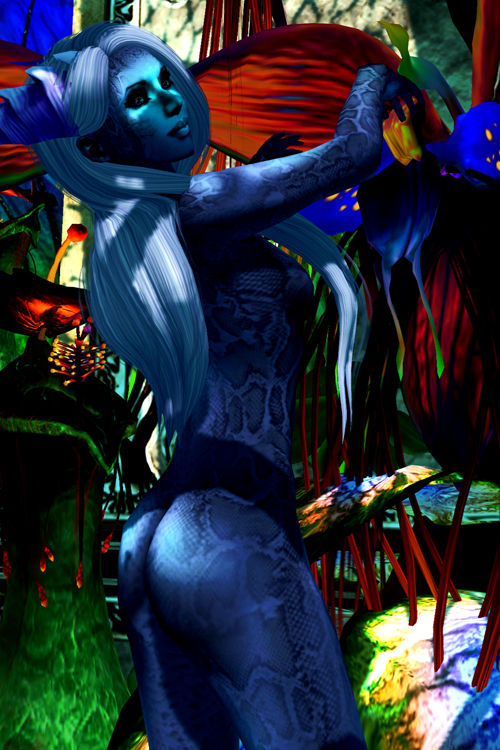 Perhaps the atmosphere in this world dyes the moonlight different, stronger. Perhaps the plants themselves soak it up and reflect it on the passing creatures. Whatever the reason, this night does not hide anything in the shadows, but reveals, basks and delights in a feast of colours. 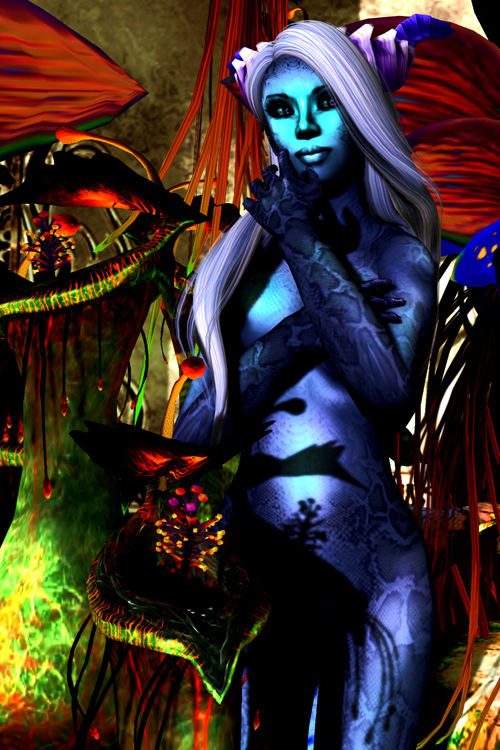 For those of you who are seduced by brilliant colour combinations, you can find these wondrous plants by Cerridwen’s Cauldron in Fantasy Faire at the moment, in Titan’s Hollow. The scaled, draco toned skins by Fallen Gods Inc. and the Erika hairstyle by Wasabi Pills can be found in Magnificat. The horns by [europa] are available in Ravenshard and the poses by c( Two Cats ) in Evensong Woods.

That’s the theme of this year’s Hair Fair Photo Contest. The rules are pretty flexible: only new pictures, hair can be any old thing or even self-made and the contest runs until June 30th. The Hair Fair itself will be in July, 14th to 29th.

I know it’s a cliche and an obvious association, but it’s such for a good reason. Flying is freedom, at least for me. Thus wings are the perfect symbol for it. I wanted a picture of flying, of long hair blowing in the wind and picked one of the Diva hairs from [ 69 ], probably not available anymore. There really should be much more editorial hairs on the grid, they’re wonderful for this kind of things. 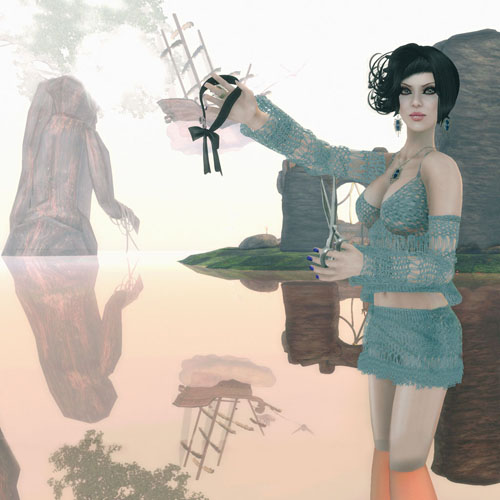 Freedom is also about cutting ties and sailing wherever your imagination leads you. I originally wanted this one to be about cutting your hair — since sometimes it feels like I’m one of the few spokes-avatars for short hair on the grid — but what worked well as an idea looked like a beheading in the pictures. So symbolic pretty ribbon it is! The short hair is one of my favourite default ones from Waka & Yuki.

Well, possibly quite not so little. Strictly speaking also not actually birds. But definitely three avian looks showing off the new Fallen Gods Inc. skins now available in The Tides of Fantasy Faire.

The skin-line is called feathers and is further divided into hawk, raven and dove, who all have different base skin tone options as well. Not to mention the possibility of making them PG. Obviously the base skins are not PG, but it’s delightful to be able to cover the parts that need to be covered for a flight in public. 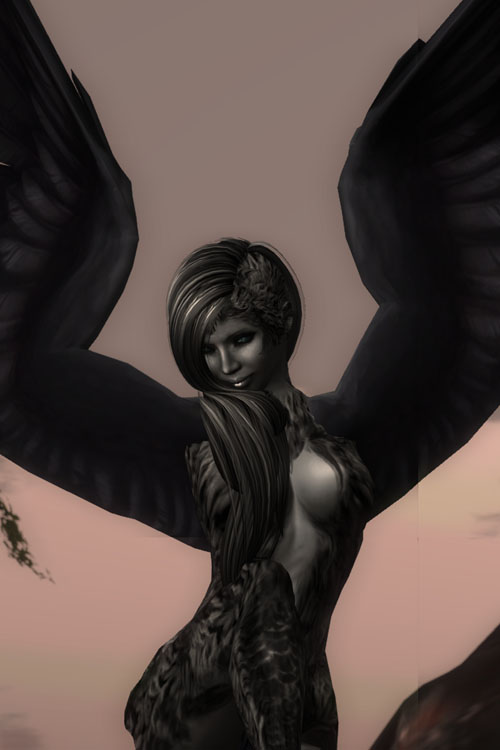 The birdy-heads are covered in feathers so in theory you could even fly around bald, if you wanted to. Obviously such thing is a no-go for Sonya who would rather fly around completely naked than without hair, but it’s still excellent thinking! All of these birds are using Teeloh-hair by Wasabi Pills. It’s a new release available in The Tides and they do come with their own hairbase layers. The birdies don’t use them since I wanted to show the scalp feathers, but rest assured: the hair has its own as well.

As for the gorgeous mesh wings, they are by [europa] and the moment I saw Alia’s new skins I knew I had to have them. The feathers demanded actual bird-like wings, not angelic back-attachment. I blame Orcsy for this, what with her constant wing flaunting. Flaunting, I tell you! ❤

All the birdies fluttered about in the Ruins of Nu Orne.