“There’s a bun in the moon!” The smallest bunling hopped up and down excitedly. “I can see her!”

Addler shook his round head slowly. “Nope. Moon is a prittiful star lady, like Ladybun! All glowing and radiant and gentle and kind toward critters and generous with noms and-“

Bunlings pondered this claim carefully, peering at the moon in the sky, washed in its light.

“It’s so big that if there’s a bun there, surely it’s a whole nest! Many nests. Burrow!”

“‘s both.” Said the more talkative of the squirrel brothers. “Obviously. There’s a star lady in the sky, ‘n you can’t see her because she’s all kah-moh-flaaazed, ‘n you see just stars on her skin. But she wears moon on her head, like Ladybun always wears all the things ever.”

“AND. And. On that moon on her head there’s a bun. Just like Ladybun carries critters with her, the great giant star lady carries moon bun on her head, too.”

“Oooooooooo.” Critters sighed in unison, peering back in the sky. Reverent silence fell, broken after a moment by Addler’s dreamy voice.

* * *
It’s time for the annual Fallen God & Goddess Contest! Simply take a picture of yourself wearing a Fallen Gods Inc. skin and send it full perms to me (Sonya Marmurek) to participate. Picture ratio 4:3, more details and rules here. Every participant gets an exclusive skin!

“Are you SURE this is the queue for the nom kiosk?” The fourth bunling sounded a bit dubious and tilted his ears matchingly.

“Of course!” answered the first bunling. “Just look at all of those locals lining up! They wouldn’t do that without a good reason.”

The other three bunlings nodded in unison. It made sense. They knew there was no better reason to queue than noms, after all. They stood still for another long moment before the second bunling piped up.

“Maybe we should go see where the end of the line is?”

There was considerable headtilting at this. The third bunling nosed his ear in ponderings.

“Wouldn’t that be rude? They look like they’ve been waiting a long time.”

More nodnodding took place. Bunlings didn’t want to cut the line, they were happy to wait their turn.

“Maybe the kiosk isn’t open yet, and the queue will be shorter later on?”

“I know, let’s go find the others! ‘m sure they’re here… somewhere.”

Bunlings had journeyed into the Fairelands with a group of critters, but they had all hopped through different portals in the Junction, and scattered after all the squeesome things and magical scents.

“A QUEST!” the first bunling exclaimed, proud to remember the tricksy word. “We shall find them, ‘n then get rewards!”

“What kind of rewards?” The other bunlings were wide-eyed with excitement. The fourth one almost felled over.

The first bunling pondered for a moment, then nodded so deep his whiskers touched the ground. “Flags. There will be flags.”

There indeed are flags for anyone finding certain critters in the Fairelands. You can see all the absolutely srs critter-finding challenges on the Faire’s website, and whenever you find one of the critters in the picture, click them for a flag.

PS: The bunlings are forming the orderly queue in the Faireland of Midas. Fantasy Faire is open April 18 – May 5, so visit them while they’re here!

“But are you SURE the matsikal fotoshop will give me tattoo? Maybe we should try crayons instead?”

“Yes, I’m sure. …and the result might still look like crayons, but I promise, you will have a Fallen tattoo and can participate in the contest.”

I can’t help it, the critters always want to participate! So this year there’ll be two white bunnies with the golden tattoos in the contest. What contest, you might ask. Fallen God & Goddess Contest, of course! All the participants get an exclusive participation skin for their efforts, and in addition there’s a huge hoard of Fallen gift cards for various categories, and naturally the title itself, Fallen God 2018 and Fallen Goddess 2018 for the winners of the year!

In a nutshell: take a picture of yourself wearing a Fallen Gods Inc. skin of your choice, send it to me (Sonya Marmurek) with full permissions before October 13th, 11 PM SLT. The details and rules and details about the rules can be found here: Fallen God & Goddess Contest 2018.

The contest is always the first step toward the Fallen Gods Inc. Anniversary, heralding an October full of various events, Fortune Teller with a full avatar prize, parties, dance theater, live music, war bugs, general insanity and of course the market on top of the store and the gridwide hunt! More information can be found here: Fallen Gods Inc. 11th Anniversary Schedule.

The journey through scarydark had been long. Bunlings kept stopping and peeking behind them to make sure the strange mirror creatures were not following. They didn’t. Eventually they decided that Faireland magic kept them in the Mirror World and relaxed.

“Maybe they’re not mean? Maybe they just look all grrrr?”

“Like Matshan?” Bunling flopped his ears thoughtfully. Maybe the Mirror Creatures would be full of good magic too when met.

“Ys.” Both bunlings paused to consider this possibility, then shook their heads.

“There was no critters near, only bones. That’s bad grrr.”

“They can stay in the mirror. No need to hlp out!”

Happy with their decision the bunlings continued following the gigantic glowing mushrooms that towered over them. The corridors were long and dark, but eventually their noses caught a familiar scent.

Hopping turned into zooming as the bunlings followed their noses straight into the bazaar, and into the carrot container, the true golden treasure of the Bazaar Dungeon.

Bunlings are adventuring in The Bazaar Dungeon at Fantasy Faire. Come join them!

It is tricksy to cross the sea between Falls of Hope and Aetherea, especially if you’re not a mermaid. Or have a handy snorkel. Or if you cannot really swim, just splash a little in shallow pools for fun.

Fortunately the bunling had come prepared with a mighty ship. He did not really have paddles — nor paw flexibility to use any — but the ship had a big sail, and Fairelands always seemed to help the travelers to get where they were going. The bunling liked that, and wished other lands were as friendly, too.

As he was bravely sailing across the endless ocean, he suddenly noticed a flower crown emerging from the depths, followed by a fishie. There was a moment of excited waving and almost toppling over, then a calmer happy greeting.

The fish said he usually frolics with all his friends in the endless embrace of colours, but sometimes he peeks up at the strange thin water above the cover of the world. Bunling peeked up too, but saw only fluffy clouds in the sky. Then he peeked down and touched his nose to the wet surface, causing ripples. He leaned further… and further… and then almost tumbled over as he saw the colours. So many colours all over, swaying and dancing in the water!

The newly-found fish-friend straightened the mighty ship and nudged it to follow the right stream, to make sure the bunling would reach land safely. He waved, and waved, and waved some more, until the flower crown vanished from sight. He did not dare to peek into the water again, it had all looked immense and easy to get lost in — even with a snorkel — but he kept thinking about the colours. One day he’d learn how to bubble safely and go back. One day he’d also frolic in the colours with fish friends.

The bunling is sailing in Fairelands Junction, visiting Fantasy Faire, which is still open until May 7th!

Addler was not quite certain why hoomans called good things a heaven. Heaven was blue and white and sometimes even rainy. Regardless, he had heard the expression often enough to ponder whether this could be one. He had never seen so many waffles anywhere in his life! He had lived long, too, at least all the pawfuls! It was a mountain of waffles, and more were appearing all the time, like magic!

He sniffed around in case this was Matshan’s doing — when things appeared out of nowhere, it often was — but could smell just the waffles, and various critter scents, and more waffles! He waddled closer to the waffle shower. Closer. Clooooooser.

When one dropped on his head he finally believed they were real. He took a bite, then another. Then another. Three waffles later he remembered to look around in case there were any potential waffle treasure owners glaring at him, but nope. He was alone. Alone with a mountain of waffles!

Five more waffles later he felt his tummy rounding up from the golden treasure, and he plopped down, letting the waffles rain on him. The world was golden and squareish and delicious smelling. He felt fuzzy-headed and after a little while flopped backwards, letting the waffles half-bury him. World was wonderful. Waffles were wonderful. Perhaps… perhaps world was a waffle. Yes. In his sugar-induced higher meditative state, this felt like the most profound truth of all time.

World is delicious and intoxicating and fulfilling and sometimes exhausting.

World is a waffle.

“Oooooooooooo.” Bunlings exhaled their astonishment in unison, a small soft sound echoing over the temples.

“It’s all shiny!” One exclaimed, then lowered his voice to a whisper. “‘n prittiful ‘n there’s fishies!”

“Floaty magic! I wonder if there’s floaty upside hoomans living there, too.”

“Think we’ll be upside down if we go there?” The smaller bunling tilted her head and almost tumbled over from the roof where their floating flower vehicle had landed.

“I see green things!” There was paw-pointing toward the lawn, and happily perked ears.

“Let’s-” A pause, a glance down, a glance at not-good-at-climbing-paws, then both turned toward the floaty flower and hopped on once more, just to let it glide gently down.

“Now let’s look clos-” Another pause, and both bunlings sniffed the air.

“Also smells of flowers and candles and and… magic and gudspirits!”

Bunlings hopped and bopped allover, checked under the benches and cushions, nosed trees and flowers, clambered up big stairs to even bigger buildings, headtilted at each bell sound until they eventually found stairs leading to what seemed like scattered flowers and food.

“I think the gudspirits are invisible. Makes sense, less hoomans bothering them.”

“Look, hoomans leave things for them to nom! We should, too.”

After a slow clambering and dragging of a big carrot up the stairs one by one, the bunlings finally laid the vegetable next to the other gifts on the shrine.

“Hello, gudspirits! We come from Ambar. Everyone says hai!”

“You smell like home, so we must be friends! We brought you a karot. It’s very tasty.”

The bunlings stayed silent for a while, as to listen, ears tilting from one side to another. Then both bopped a small bow and hop-tumbled down the shrine, leaving the offering next to the flowers and incense to delight the spirits.

Bunlings are visiting Fantasy Faire, come join them in Aetherea! 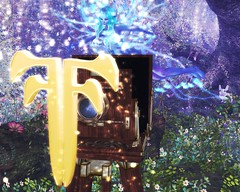 Review copies are marked with * and slurl in the credits list.
Astalianda