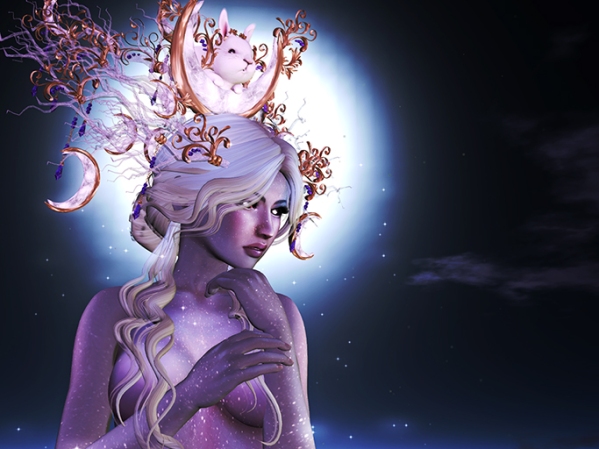 “There’s a bun in the moon!” The smallest bunling hopped up and down excitedly. “I can see her!”

Addler shook his round head slowly. “Nope. Moon is a prittiful star lady, like Ladybun! All glowing and radiant and gentle and kind toward critters and generous with noms and-“

Bunlings pondered this claim carefully, peering at the moon in the sky, washed in its light.

“It’s so big that if there’s a bun there, surely it’s a whole nest! Many nests. Burrow!”

“‘s both.” Said the more talkative of the squirrel brothers. “Obviously. There’s a star lady in the sky, ‘n you can’t see her because she’s all kah-moh-flaaazed, ‘n you see just stars on her skin. But she wears moon on her head, like Ladybun always wears all the things ever.”

“AND. And. On that moon on her head there’s a bun. Just like Ladybun carries critters with her, the great giant star lady carries moon bun on her head, too.”

“Oooooooooo.” Critters sighed in unison, peering back in the sky. Reverent silence fell, broken after a moment by Addler’s dreamy voice.

* * *
It’s time for the annual Fallen God & Goddess Contest! Simply take a picture of yourself wearing a Fallen Gods Inc. skin and send it full perms to me (Sonya Marmurek) to participate. Picture ratio 4:3, more details and rules here. Every participant gets an exclusive skin!

“Do you think they eat paint?” Bunlings stared at the rainbow forming between the two elephants.

The smaller bunling shook his head. “Paint smells bad. Must be bad nom.” He perked his ears. “Maybe they eat colourful noms!”

“Strawberries ‘n kiwis ‘n blueberries ‘n-“ They stared at the rainbow’s colours for a long moment, trying to think of berries and fruit in all the colours.

“So they eat noms, ‘n then they… breathe colours!”

Bunlings watched for a moment more, satisfied with this idea.

“Best magic show in the Fairelands.”

PS: The bunlings are adventuring in the Faireland of Sanguinely Garden. Fantasy Faire is open April 18 – May 5, so visit them while they’re here!

The first squirrel tilted his head, peering up at the shooting stars. This theory did make quite a bit of sense to him.

“Then why are they glowing?”

A moment of silence as both squirrels scratched their heads. Then the second one nodded again. “Sky magics. The nuts in the sky are glowy, see! There must be a huge forest up there, ‘n we can see just the glowy nuts!”

“Ooooooo.” The first squirrel tilted his head, pondering this. “Maybe there’s a harvest going on and they’re shaking the trees!”

“Yes! ‘n maybe, mayyybe if we find one sky nut, it’ll be a feast for whole family tree!”

PS: The squirrels are adventuring in the Faireland of The Celestial Plain. Fantasy Faire is open April 18 – May 5, so visit them while they’re here!

“With noms and spa and waterslides and clean under-couches and soft pillows and and-“ The other bunling sounded excited, although her ears were lowered.

“Yes!” The first bunling exclaimed, then peeked around nervously, in case something had heard him.

Neither bunling hopped up the next giant stair. The first one scuffed a small paw against the stone. The second examined her ear.

“Maybe the others went there, too?” Now both rose to hindpaws enough to try to peek toward the looming structure.

“Maybe we could knock on the threshold?”

“The gate is closed, there can be no hoomans inside.” Critters, naturally, would fit through the bars.

“Nor anything bigger!” This thought cheered them up considerably.

The first bunling raised his ears and hopped one step up. “Are we brave adventurers or bunlings!”

“Bunlings.” The second one hopped up despite her answer.

Hop by huge gravity-defying hop they moved toward the giant castle. Curiosity kills only cats, after all.

PS: The bunlings are adventuring in the Faireland of Thornfast. Fantasy Faire is open April 18 – May 5, so visit them while they’re here!

“Are you SURE this is the queue for the nom kiosk?” The fourth bunling sounded a bit dubious and tilted his ears matchingly.

“Of course!” answered the first bunling. “Just look at all of those locals lining up! They wouldn’t do that without a good reason.”

The other three bunlings nodded in unison. It made sense. They knew there was no better reason to queue than noms, after all. They stood still for another long moment before the second bunling piped up.

“Maybe we should go see where the end of the line is?”

There was considerable headtilting at this. The third bunling nosed his ear in ponderings.

“Wouldn’t that be rude? They look like they’ve been waiting a long time.”

More nodnodding took place. Bunlings didn’t want to cut the line, they were happy to wait their turn.

“Maybe the kiosk isn’t open yet, and the queue will be shorter later on?”

“I know, let’s go find the others! ‘m sure they’re here… somewhere.”

Bunlings had journeyed into the Fairelands with a group of critters, but they had all hopped through different portals in the Junction, and scattered after all the squeesome things and magical scents.

“A QUEST!” the first bunling exclaimed, proud to remember the tricksy word. “We shall find them, ‘n then get rewards!”

“What kind of rewards?” The other bunlings were wide-eyed with excitement. The fourth one almost felled over.

The first bunling pondered for a moment, then nodded so deep his whiskers touched the ground. “Flags. There will be flags.”

There indeed are flags for anyone finding certain critters in the Fairelands. You can see all the absolutely srs critter-finding challenges on the Faire’s website, and whenever you find one of the critters in the picture, click them for a flag.

PS: The bunlings are forming the orderly queue in the Faireland of Midas. Fantasy Faire is open April 18 – May 5, so visit them while they’re here! 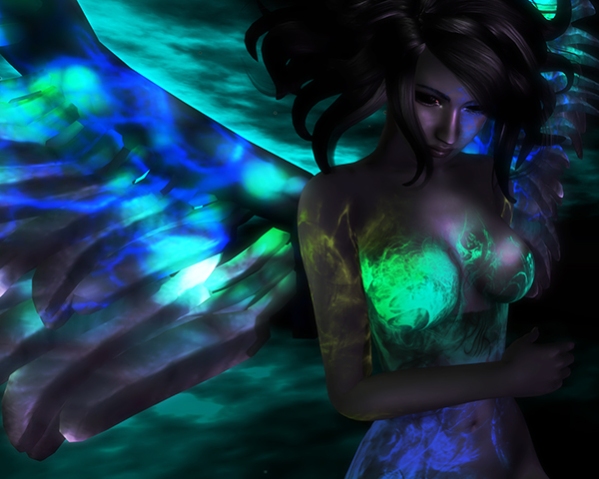 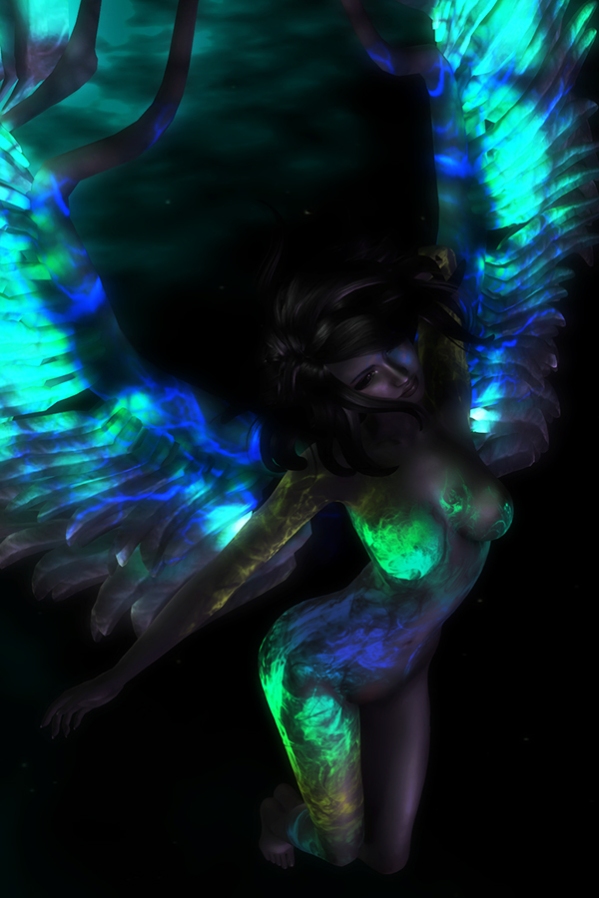 They have waited, oh, how they have waited. Each night a thousand more, wrapped in the dark, their sense of self eroding until they are one with the Abyss, one dark being forever waiting. Until the Night arrives, until the glow separates them once more, gifts them separation, an identity. Shows them the way out. 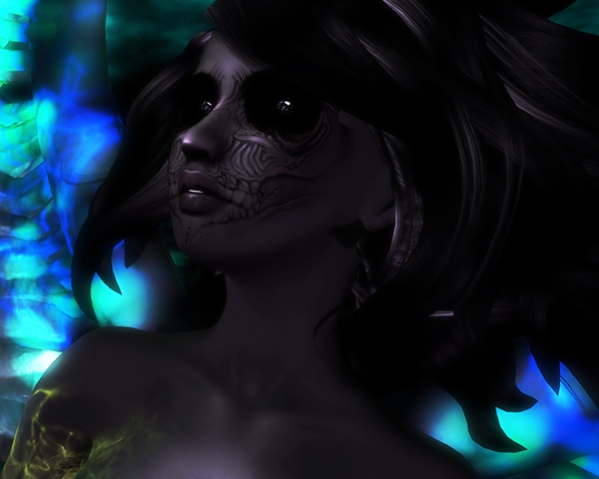 They can speak, the stones. They could tell stories of the world before green growth, before soft organic beings wandering around. They could talk of veins of magma, hearts of fire, spirit of magic so old that it needs no name. 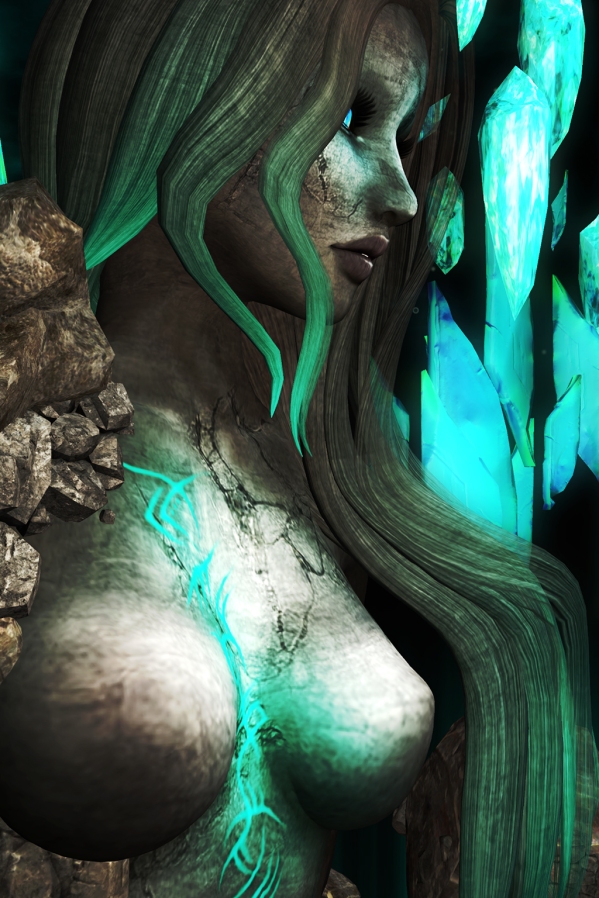 They remember sensing the movement on their surface, the new shapes, the curiosity. They remember the Plan, the creation of forms that could communicate with these strange, soft things. They remember how they were cut loose, these drops of old stone and energy, separated from the whole; now mobile, individual, alone.

They know some day the Children of the Stone will return to them and teach them about the lights and sounds, soft creatures and fast-living beings. Fast-dying beings. Until then the Stones stay silent in their vigil, silent in their long wait and slumber.

Fallen Gods Inc. 11th Anniversary Festival is almost over, although there’s still activities and events such as the Ice Olympics and Noobcon left. One of the things leaving Selidor at the end of October is the Fortune Teller, where you still can win a complete avatar Opus for free, by simply finding your match and sitting with them to listen to Teller’s ultimate wisdoms. A red ruby version of the avatar is for sale in the market on the store’s rooftop, and an amethyst version of the skin is a reward in the Quasar Hunt (also ending on the last of October). All this to say that if you haven’t visited Selidor and the various Anniversary activities and events yet, now’s the time!

More information and previews about Opus.

Review copies are marked with * and slurl in the credits list.
Astalianda